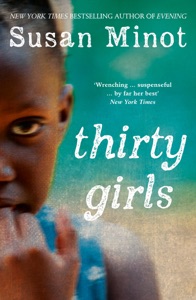 This is the fate in store for Esther. She is one of 139 students abducted from St Mary’s School. When their headmistress tracks them down she must accept a dreadful bargain; most of the girls will be released, only if thirty remain with the rebels. Esther is one of the thirty. And eventually she will have to learn to live with all she has seen and done to survive.

Jane is an American writer, observing the glamour of Kenyan ex-pat life while she waits for transport to the border. She has come to write about what’s happening to Uganda’s children. But her fragile emotional state will be sorely tried by her experiences.

In unflinching prose, Minot gives us razor-sharp portraits of two women struggling to wrest meaning from events that test them both in unimaginable ways. Intense and stunningly evocative, ‘Thirty Girls’ is Minot’s most ambitious novel yet.

‘”Thirty Girls” is based on one of the strangest and best-known episodes from that bloody period in Ugandan history … What is unnerving about “Thirty Girls” is how easily Minot’s style fits this much more extreme and disturbing subject matter. The stark tone and structure of short, vivid scenes seem more appropriate to the tale of traumatised schoolgirls than they do to the ordinary miseries of rejection or miscommunication … Minot pulls off the account of things that might seem so horrific as to be unspeakable’ Lidija Haas, Sunday Times

‘A heart-rending novel based on horrific real-life event. A punch in the gut over and over again’ Chris Pavone, Metro

‘Admirable … ‘Thirty Girls’ is a malignant picture of a country that gnaws away at its own children, and of the impotence of those who watch from the sidelines’ India Ross, Financial Times

‘A novel of quiet humanity and probing intelligence … Minot is particularly good on the topology of desire … But it’s the story of what happened to those 30 abducted girls that shows Minot’s gifts as a writer … Minot takes huge questions and examines them with both a delicate touch and a cleareyed, unyielding scrutiny’ New York Times Book Review

Susan Minot is an award-winning novelist, short-story writer, poet, and screenwriter. Her first novel, ‘Monkeys’, was published in a dozen countries and won the Prix Femina Étranger in France. Her novel ‘Evening’ was a worldwide bestseller and became a major motion picture. She lives with her daughter in New York City and Maine.